It’s hard to find someone who doesn’t love elephants. There’s just something about these giant, gentle creatures that has us mesmerised. The image of sitting on the back of an animal of such an immense size as they wander through the wild jungle, the ability to say “I rode an elephant” and have the photos to prove it, is what makes many people put going on an “elephant ride” on their to-do list. But elephant rides and attractions do not belong on anybody’s to-do list, or bucket list for that matter.

South-East Asia has always been a popular destination choice for Australians – its proximity, its culture, and the exchange rate are all reasons for choosing the region as your next holiday stop. 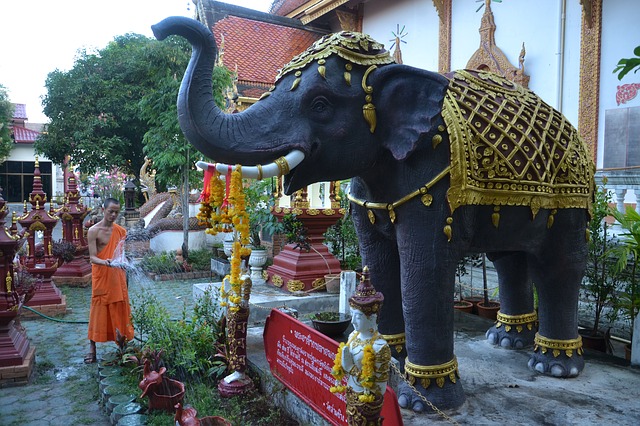 Elephants are ingrained into Thai culture (Image from Pixabay)

Elephants play a huge part of South-East Asian culture, particularly in Thailand. As the country’s national symbol, elephants are essential to Thailand’s tourist trade, and it’s nearly impossible to go on a holiday in Thailand without being exposed to some form of elephant experience being on offer, from treks to shows, all of which allow people to have an up-close interaction with the friendly giants.

We’re shown the glamour of the attractions, but what many don’t realise is the amount of work and torture that has gone into making an elephant ‘safe’ for human interaction.

Often taken from their families at a young age, elephants are placed in small wooden enclosures, referred to as “the crush” since it’s designed to ‘crush’ their spirit. Diana from D’s Travels Round describes the abused elephants as having their wrists and ankles bound tightly, before being hurt with knives and other sharp objects in their most sensitive bodily areas (ears, eyes, feet, trunk, just to name a few). During the days that this process occurs, the baby elephants are deprived of sleep and water, beaten and bloodied until they learn how to accept human commands. Sadly, many elephants do not survive the process, and at the end of it all, the ones who have survived are ‘trained’, but broken – their ties to their family are gone, and they become slaves for human entertainment.

Elephants belong in the wild, not at an attraction or a camp, for the purpose of making profit.

You can help end the promotion of unfair wildlife venues by filling out Animal Australia’s online form today, asking Flight Centre to stop offering tours that include animal attractions.

View all posts by fatalanimalattractionsblog

Raise your voice and ask Flight Centre to follow the steps of other Australian travel agencies and stop promoting tours that include cruel animal attractions by filling out this simple form.

Let TripAdvisor know that you're not okay with them profiting from selling tickets to animal attractions around the world by signing this online petition.